Current inventory is now sold out. Thank you to all our customers for making this season so fruitful! Next season's inventory will be published in Fall 2022. We look forward to welcoming you back in the Fall! Dismiss

The Wolf River apple tree is an American cultivar that originates on the shores of Wolf River in Wisconsin from the Alexander apple variety which was brought to the the mid-west in the 1860s from Quebec, Canada. Wolf River apple tree is well known for being cold hardy and is generally disease resistant. It is very adaptable and can thrive in different soil and climate conditions. So it’s been a popular choice for growing in especially colder temperatures. It’s a great choice if you want an apple variety that keeps well in storage!

Wolf River apples are usually quiete large in size and start to ripen from mid-September to early October. Often the fruit weighs one pound! Due to its unique ability to keep shape when cooked, it is a wonderful apple variety for culinary explorations. From baking to cooking to eating fresh, Wolf River has a sweet, juicy taste and is quite aromatic. Besides serving as a great apple pie, Wolf River can also provide fluffy apple butter after slow cooking for hours. 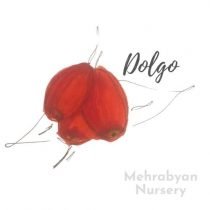